← Everything in its Place
The Hyaenas →

How Much is a Trillion Dollars

At the Avenue of the Americas, in Manhattan, New York City, there is a billboard sized electronic display called-The National Debt Clock. It shows a running total of the national debt of the United States and each citizens share of that debt. It currently stands at around 14 trillion dollars and counting. That is a  figure that beggars the understanding of most people.It is almost impossible to imagine because there is no point in our lives that such numbers have any real meaning to us. A human being could start counting seconds and die long before he reached a trillion, because a trillion seconds equals thirty-one thousand years. At no point in your life will you deal realistically with such numbers, so, lets look at it from a different angle.

People have been digging Gold from the earth for thousands of years, and turning it into jewelry, money, and objects of art. In the last two hundred years a great many industrial uses for the  versatile metal have been discovered and exploited. Gold is virtually indestructible, and of such enduring value that its recovery, in all its forms, is an industry unto  itself. The majority of all the gold ever mined is still in existence in the form of bullion; ingots of all sizes from less than 1 oz. too hundreds of ounces; jewelry, coins, and museum collections of every kind and variety of gold objects. 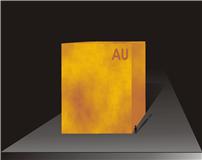 In other words, all of the gold on this sad old earth, all of it, would just cover HALF [ that’s 1/2 ] the National Debt.

ALL OF THE GOLD ON EARTH WOULD JUST COVER HALF OF THE NATIONAL DEBT.

If that thought does not trouble you or give you pause, then don’t worry your pretty little head about it.

Go back to sleep.We’ll send someone to wake you up before the last boat leaves.

It’s as good as gold.

Posted on January 8, 2011, in Where This Road Goes and tagged debt, Default, Dollars, Gold. Bookmark the permalink. Leave a comment.

← Everything in its Place
The Hyaenas →