← My Fathers Flag
The Faith of Our Fathers →

Why Nador is Smiling 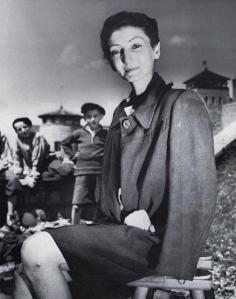 There is a picture taken by a U.S. Army Signal Corps photographer at the end of World War II, of a woman who has just come out of a German concentration camp. Her name is given as Nador Livia. Her self composure and her inexplicable smile have always held a fascination for me; most images of  survivors of Hitlers version of Hell look crushed,  collapsing in on themselves. Drawn faces, emaciated bodies, dead expressions fill picture after picture of people who do not look like they have triumphed over death, but rather that death missed them for some unknown reason and is surely coming back to correct the mistake.

But then there is Nador Livia. She sits, erect and composed, looks confidently at the viewer and smiles.  Why?  Or more importantly, how?

My first clue to the answer comes from another death camp, and not from the survivors, but from the ones who rescued them.

One of the British doctors , given the hopeless task of saving the survivors, made some interesting observations about them.

He said that you could divide the inmates into two distinct types. The first group was filthy, disheveled, either naked or clothed in the barest semblance of clothing, rags really. They didn’t speak, but rather grunted and snarled. If you offered someone in this group any food, they would snatch it from your hand, run to a hiding place and wolf the food down before it could be taken from them. The doctor described those in this group as having lost all semblance of humanity, they had become mere animals.

The second group showed all the physical deprivations of the first, but, they were as clean and neat as they could make themselves under the circumstances, even in ragged clothing they exuded a certain dignity.  They spoke clearly and rationally. If given food they would take it to someone unable to receive it on their own. If aid of any kind were offered them, it would  be re-directed to someone they deemed to be in greater need.

Their faith in God was bent and worn, but still there. Their first action, as a group, upon being freed from their SS guards, was to conduct services for the living and the dead, a comfort denied them  the long years of their imprisonment.

Nature can visit terrible injury and suffering upon the sons and daughters of Adam, but nothing can equal the misery of being slowly killed, day after day by your own kind. To be starved, beaten, and senselessly tortured by hands like your own; to look into eyes that see the same pain that you see and find no mercy there, can shake loose your grip on your humanity, or, make you grasp it all the tighter. Nador Livia, and countless others, mostly unknown, held on to theirs. They kept their humanity. And when the horror of the Nazi insanity had been ground into the dust, they could hold their heads erect, look all of mankind in the eye, and smile again.

← My Fathers Flag
The Faith of Our Fathers →